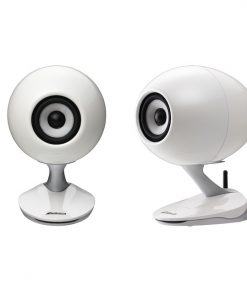 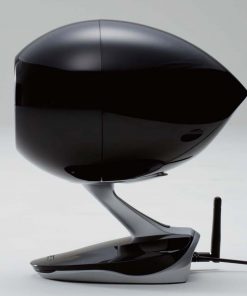 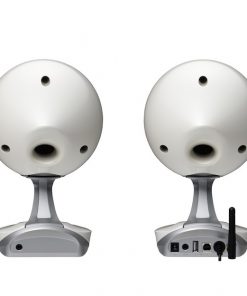 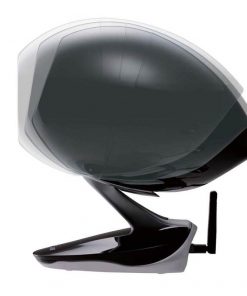 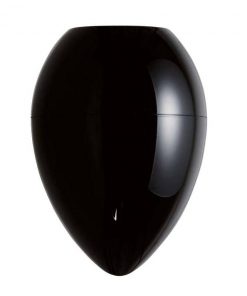 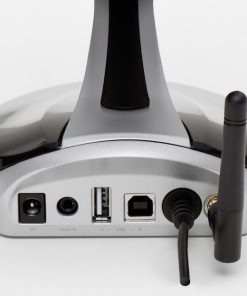 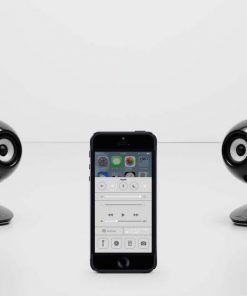 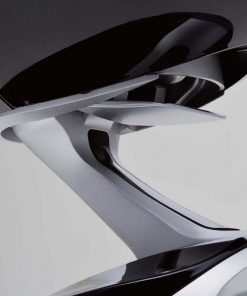 The Eclipse TD-M1 delivers ultra-fidelity sound in a system designed for today’s connected lifestyle. It reproduces music so accurately that recording engineers at studios around the world use Eclipse TD-Series speakers as their reference monitors. Performing its best at natural volumes, every detail and subtle audiophile nuance is rendered at sound levels perfect for normal conversation. While other speakers strain to deliver at anything less than concert-hall volumes, the Eclipse TD-M1 system puts a magnifying glass on the music—intimate, up close and personal.

The Eclipse TD-M1 uses the same award-winning technology employed in Eclipse’s $10,600 TD-712 speaker, while combining wireless convenience and connectivity with compact size. At home everywhere, this is the ultimate desktop system for music lovers who won’t compromise their sound. Offering total freedom of movement, the TD-M1 introduces headphone lovers to a whole new personal listening experience without isolation or confinement.

Powerful performance with a small footprint.

From a compact form factor of the TD-M1 comes life-size, realistic sound, thanks to the high-efficiency, Class-D digital amp that powers the special, crossover-less driver mounted in the Eclipse’s unique enclosure.

Highest quality, from A to D.

From input to output, the Eclipse TD-M1 is designed to work with high-resolution sound sources. A built-in 192kHz/24 bit input interface is capable of handling 6.5 times the amount of data on a CD. Eclipse engineers developed a 192kHz/24 bit-compatible, non-oversampling D-to-A converter (NOS-DAC) for clearer sound. With a world-class signal-to-noise ratio and ultra-low distortion factor, the TD-M1 is capable of playback that brings out the magic of the highest-quality original master tapes.

Wireless playback via AirPlay® makes the Eclipse TD-M1 intuitive and easy to use. CD-quality (44.1kHz/16 bit) lossless audio can be streamed through Apple devices like iPhone, iPad and Mac*, directly connected without need for a router.

Simple set-up and operation.
One-touch speaker angle adjustment allows the listener to establish the optimal listening point for an unbelievably realistic sonic landscape and precise imaging of voices and instruments. It’s like a window into the soundstage from the best seat in the house. Intuitive touch-sensor controls are built into the base of the speaker and a simple LED indicator displays operational functions, while an external input (3.5mm stereo mini jack) connects to TVs etc..

Why do they sound so real?

It’s all about the waveform. The TD project is a joint venture between technology giants Fujitsu and Toyota to explore “Time Domain,” the guiding principle that makes every Eclipse TD-Series speaker sound so real compared to even the finest conventional speaker systems that typically concentrate on frequency response at the expense of accuracy in time-domain performance.

Importantly, the use of more than one driver introduces unavoidable distortions due to delayed delivery across the frequency spectrum. Similarly, the use of rectangular, sharp-cornered cabinets creates diffraction effects and panel resonance, aberrations that become immediately audible when compared to a correct time domain design. Additionally, multiple drivers require a crossover network that creates phase anomalies and adds further coloration to a speaker’s sonic signature. Eclipse engineers understand that optimum time-domain performance is achieved by engineering out all the mechanisms that make other speakers sound compressed, non-coherent and unnatural. The Eclipse TD-M1 is a revelation; capable of an acoustic “disappearing trick” that reveals detail like never before.

*1 Charging iPad is not supported.

Be the first to review “Eclipse TD-M1” Cancel reply

…listening to the Eclipse system reminded me of listening to headphones – but headphones that everyone could hear, that didn’t make me feel as if I were in an isolation tank, and that didn’t make my ears itch or hurt. (God, I despise headphones) I wondered, more than once, if the TD-M1 has some sort of built-in, Fletcher-Munson-style loudness correction: regardless of volume setting, music played through this desktop system always sounded rich, big and uncannily right. It was almost creepy. But good creepy.

“The Eclipse system was nonetheless successful at the most important thing of all: It got me all wrapped up in whatever music I happened to be playing. I got misty during Nick Cave’s “Far from Me,” considerably more than misty during Nick Drake’s “Fruit Tree,” cloud-nine happy during John Lennon’s “Instant Karma, ” and righteously outraged during the Rolling Stones’ “Street Fighting Man.” I had a great time with this system whenever I used it – and it was always easy.”

“These Egg-Shaped Speakers Sound So Good, They’ll Scramble Your Brains”

“One of the best-sounding small speaker systems we’ve heard this year is also one of the most expensive: The Fujitsu Ten Eclipse TD-M1 Wireless Speaker System, which costs $1,300. Bananas, yes. But queue up Von Karajan’s rendition of the Ninth, kick back in your Dieter Rams 620 chair, give the volume control a liberal nudge, and you’ll be feeling no remorse about the price…The sound? Lively and sparkling. Place the speakers about ten feet apart, plant yourself in the sweet spot, and they will reproduce live and studio recordings with impressive accuracy. Delicate stuff in particular—acoustic guitar music, vocal jazz—jumps to life. Bass frequencies are meaty and don’t sound the slightest bit artificial. And unlike many small speakers, the Eclipses sound best when you turn them up nice and loud.”

The quality of sound from these tiny little eggs is simply stunning with a clarity and depth of soundstage that I don’t think I’ve ever heard from speakers costing far more. But these little beauties aren’t a pair of superbly built passive speakers, built into their small form factor is a non-oversampling digital-to-analogue convertor coupled to a high-efficiency digital amp pumping out 20 Watts of power. This set up can take audio input from any Wi-Fi, USB B (for PC/Mac), USB A (for iPhone/iPod touch), and analog (3.5mm stereo mini). So, virtually any streaming device or audio source can be connected to the TD-M1.” 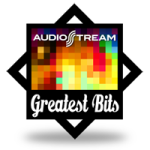 “From a Whisper to a Scream

I enjoyed every last minute listening to the Eclipse TD-M1s. Every song, every album, every note. They strike me as sounding as close to a clear view onto your music as I’ve heard sitting at my desk and I’d attribute this to the sum of their parts including their single driver, the chosen digital amp, and 24/192-capable DAC. What’s more, and more remarkable as well as being highly useful, is they sound equally engaging even at whisper levels.”

“I was attracted to this speaker system because of the technology and the styling but come away from it slightly in awe of what Eclipse have achieved in such a compact and elegant design. It’s not powerful enough to use like a conventional speaker and amp set up unless you have a small room or don’t need high volume levels but as a desk top it’s excellent. The fact that it is Airplay ready is less of an issue for me but I can see this aspect being very popular with the ‘fanboys’ and am not surprised to see that the TD-M1 is in the Apple Store. It’s pricey for a desktop system but it’s a bargain if you want to hear fine detail, great voices and a mind blowing stereo image from beautiful a small scale system.”

“Even the briefest listen clearly shows these speakers are something special. Vocal reproduction is especially noteworthy; every note and nuance is reproduced with pitch-perfect precision, giving a warmth and depth that’s seldom heard on home speakers. If you like opera or classical music, they’ll add a whole new dimension to your music.”

“The Eclipse TD-M1 is a solid contender within the computer audio desktop market. It’s feature list/bag of tricks includes a very useable Airplay protocol, but those wanting the get the absolute best out of their investment will still want to wire up with its 24/192 compatibility. The small size and big soundstage are a great combination for desktop use, as are the included adjustable tilt mounts the loudspeakers rest upon. While the lack of bass may prove to be a blessing for office situations, the remainder of the spectrum is balanced, neat and tidy. The on board streaming allows the M1 to have flexibility with placement, from the desk to a shelf or any household location in between. Those who opt for the desktop complement will even find an Apple friendly charging station for their phone with the iDevice USB connection among the multiple perks. Sonically the TD-M1 is a fine balance of enthusiasm without being obnoxious.”

“Meet the most extraordinary AirPlay system on the market

The effortlessness with which the Eclipse picks apart complex recordings and delivers everything with a compelling life and energy is utterly addictive. The market for self-contained AirPlay products is growing and there are some increasingly expensive options out there. The Eclipse arrives in this category with well developed technology and some useful extra features that make most of the competition look a little staid and conventional. If you are after the best desktop audio system a grand will get you, this has to be top of the list.”

“But where the TD-M1s really make their mark is when it comes to focus and stereo imaging. The Eclipses are simply stunning in this regard. You need to get their positioning right (on the desk in our test rooms, we found they work best at 20-degrees, slightly toed in and firing just across the front of your face), but when you do, the speakers paint an intimate portrait. Play Sam Smith’s Stay With Me and there’s solidity to each drum hit and there’s loads of detail. Play Duke Dumont’s I Got You over AirPlay and this upbeat dance track communicates the TD-M1’s great sense of timing.”