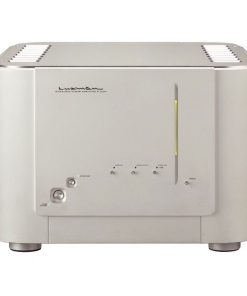 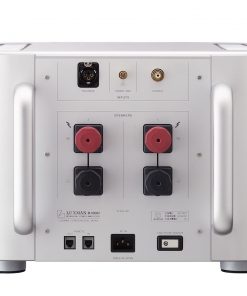 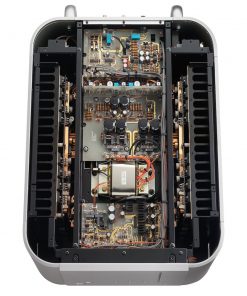 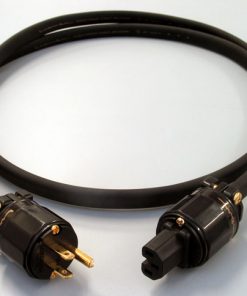 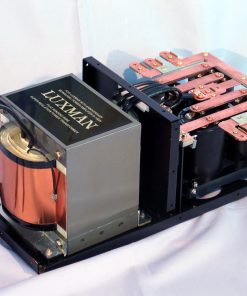 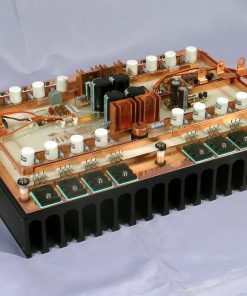 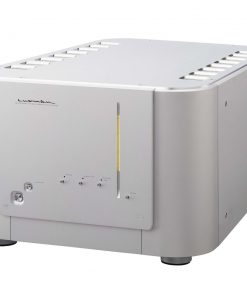 Fifteen years in development; The Luxman Board approved completion of the B-1000 in 2003 two years before Luxman’s 80th Anniversary in 2005. The Luxman B-1000f flagship monoblocks are a showcase of what Luxman has achieved over the past eighty years. Equipped with ODNF version 2.3—less noise, more music. Truly state of the art in High End Audio. Why settle for less than the best!

In order to bring out the full potential of the loudspeakers, an amplifier must be able to cope with drastically fluctuating speaker impedance conditions. This can only be achieved by ensuring constant drive voltage at all times. In other words, the output impedance of the amplifier must be kept very low. This also makes it possible to absorb the counter-electromotive force generated by the voice coil, thereby eliminating a major source of intermodulation distortion. With an amplifier that is stable into a 1Ω load; no matter what impedance the speaker drops to, no need to worry about your speaker’s phase shift – these amplifiers are unflappable.

With continuous output power of 2,000 watts into 1Ω—will easily drive the most difficult speaker loads.

Luxman only began exporting these amplifiers for the first time outside of Japan during Q3 2007.

Luxman’s patented ODNF circuitry has redefined the relationship between music signals and noise and does not use phase compensation or NFB loops in the music signal path, instead it accurately isolates distortion components to cancel them.

Luxman holds many patents for audio engineering, amongst them is the application of Global Negative Feedback to the output stage (1955), which while widely used throughout the audio industry, they no longer use themselves.

Luxman nowadays use a distortion reduction circuit called Only Distortion Negative Feedback (ODNF). This system works by isolating noise & distortion at the output from the music signal and sparingly applying negative feedback to suppress them. Conventional negative feedback systems can have an adverse effect on the music, introducing phase distortion. “The circuit features such an ultra-wide range, ultra- high slew rate and ultra low distortion that it does not use phase compensation for the music signal amplifying circuits.” This new technology also ensures that need for a DC servo circuit is alleviated, again improving sound quality.

Chassis bases have superb vibration absorption in order to suppress noise levels. The power transformer, electrolytic capacitors and amplifier output stage are laid out so as not to interfere with each other. To reduce interference further, the block construction isolates each section using shielding panels, and extensive internal filtering to reject magnetic flux interference.

The EI transformer, which was designed by Luxman, is wound with the 2mm thick flat OFC copper wire and weighs 55 lbs! The flat copper cable is insulated with paper, as it does not allow static electricity to build up. The flat cable has superior stacking capability over round cable. Each transformer is wound by hand and the cable is so massive and rigid that it needs to be hammered into its exact location. The output leads from the transformer are bolted directly to the solid copper Bus Bar to allow the music the shortest possible signal path, unimpeded by connectors or anything that could degrade the music even slightly.

RJ11 connectors are used for the remote 12volt DC ON/OFF trigger. Over-sized five-way speaker cable binding posts that can be locked down for a secure connection.

Following in the tradition of its other custom parts and processes, Luxman has developed its own series of conductors for JPA-2000 power cables. High purity 8 awg copper and extensive shielding to provide extensive rejection of RFI and EMI. This is the finest power cord that Luxman knows how to manufacture. The elegant presentation, supple flexibility and indefatigable structure of Luxman power cables speak volumes about the attention to detail that went into their manufacture.

(to the right of the AC socket)

Here is a clever device found on the back of every Luxman powered product. You press the button and it will check the phase of the electricity it is receiving. If the AC outlet in the wall is incorrectly wired, meaning the live and neutral are swapped, a red LED will turn on to warn you. You only need to press it once, when you are installing a product to check that everything is in order. It’s a simple mistake, that occurs often, and one that can undermine your listening enjoyment. It is this fanatical attention to detail that delivers such superior sound quality.

In order for an amplifier to multiply the signal cleanly, it first needs to receive clean electrical power. Luxman view the AC input with great concern, just as serious listening tests are applied to the power cables, so too is the AC inlet built to rigorous standards. With the B-1000f, the AC inlet starts with high purity brass which subsequently receives a non-magnetic nickel plating and finally gold-plating is administered in order to maintain resistance.

“It is impossible to overdo luxury…Like most audiophiles on a budget, I’m always looking for the best sound for the dollar I can find. But when confronted with a component that is clearly superior, it would be foolish for me to deny the fact simply because I can’t afford it. The Luxman B-1000F is clearly a superior component, possibly the finest amplifier I have ever auditioned.

Is it worth $60,000/pair? Define worth. In its construction, design, and meticulous attention to the smallest detail, no one could mistake the B-1000F for a bargain. But it’s hand-built and beautiful, and is the best there is at what it does—and what it does is pretty. Pretty amazing.”

“Even at modest levels this system occupied the ‘zone’ and offered deep bass and transparent highs without the slightest emphasis…system utterly subtracts itself from the picture to leave behind only the music without any technical reminders of artifice. The C-1000f/B-1000f components proved to be amazing feng shui wind masters.”

“As I think back about all of the amps I’ve heard, or at least the ones that come easily to mind, I can remember none that seemingly incorporates the strengths of them all better than the Luxman B-1000f. It has a fundamentally neutral signature, standard-setting bass depth and linearity, and doesn’t display obvious colorations that will cause you to revoice your system to overcome them. There’s no solid-state leanness or tube-like warmth, no bass bloat that gives the illusion of power, no zingy treble. There’s just an open window on the intrinsic sound of the recording, a sonic character that passes on the signal fed to it with great detail and dynamic expression.”