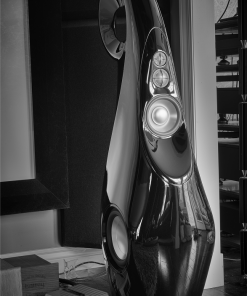 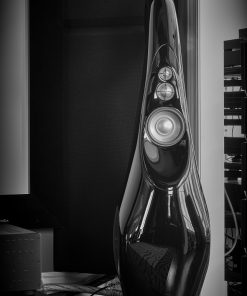 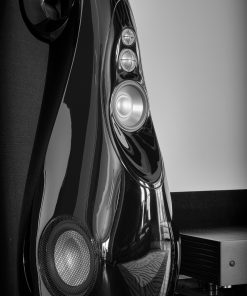 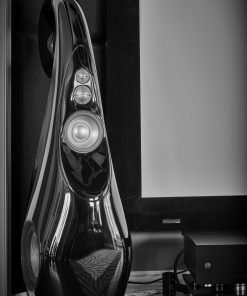 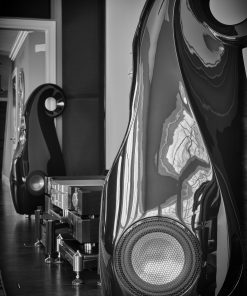 GIYA G2 launched in 2010 was “The best speaker Vivid ever made at the time” as reiterated by by Doug Schneider of Soundstage Network and without exception every G2 owner we have sold this model to.  It was acknowledged that these possessed all the qualities of the larger model (G1) with a minimum of compromise.

Following the launch of the G1 in 2008 and the wave of critical acclaim with which it was received, it was decided that this singular product should be joined by a smaller sibling to suit a more modest listening environment and the Giya G2 was launched in 2010.

With every reason to expect the mid and high frequencies to be virtually unchanged from its big brother, the G2’s astounding success has to do with its uncompromising bass performance.

Bass alignment in GIYA designs is like any reflex enclosure and fundamental rules of physics connect the size of the cabinet and driver design with the efficiency and bass extension.  Judicious juggling of parameters resulted in a response which closely follows the shape of that of the G1 albeit with a modest reduction in output level and extension but completely preserving the essential qualities of the GIYA bass speed and articulation.

As with the C225 bass unit used in G1, the C175 in G2 uses an aluminum magnesium alloy diaphragm but while it is customary to downscale the motor when using a smaller cone, because of the unique approach to bass alignment it has been possible to employ exactly the same magnet and voice coil as that in the larger driver, giving the same generous linear excursion.  Identical suspension profiles also permit the huge 50mm mechanical travel so, despite its reduced size, this driver is still capable of moving enormous amounts of air.  Such a light cone and high efficiency motor naturally results in stunning bass “speed” and articulation.

Every driver and filter network is optimized to give a true fourth order acoustic response through each crossover point.  The result is zero phase shift between each successive driver so each pair sums seamlessly as power transfers from one to the next.  Furthermore, this type of alignment yields a symmetrical vertical coverage, while the close proximity of the drivers, the result of the use of the compact radial magnet topology, ensures a wide vertical coverage meaning that the listener will experience the same sound whether sitting upright or relaxing in the deepest armchair.

All GIYA enclosures are built using undirectional fibre-reinforced skins with a low density core.  The dry fibre pack together with the core is laid in the tooling before being clamped shut and the resin administered under vacuum to maximize the fibre fraction.  This type of sandwich structre yields a shell with a high stiffness to weight ratio and high dimensional accuracy normally reserved for aerospace applications.  In the world of loudspeaker engineering the benefit comes from the high velocity of sound.  Lateral fibre reinforced grids complement the stiff shell and ensure all resonant modes are well out of band and cabinet coloration all but eliminated.

Stereophile – Product of the Year 2014