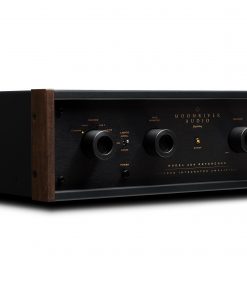 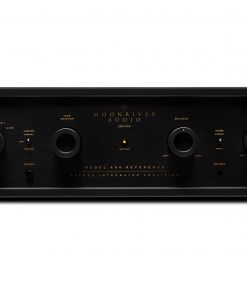 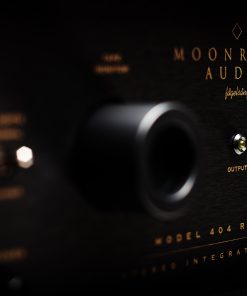 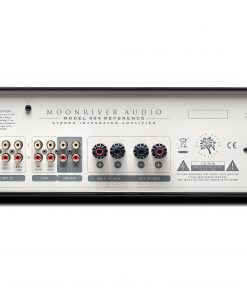 The power supply section has been improved to the maximum.  This enormous increment expands the driving behaviour; the dynamic character; digs out more detail; low level information; a deeper and more articulate soundtstage; space between instruments is vast, while the bass has greater authority and is more confident than ever before.

At On A Higher Note, we have paired up both the Moonriver Audio 404 and this new model, 404 Reference, with many different speakers, including Graham Audio’s BBC designed monitors (standard model drives up to the LS5/9’s best, and the 404 Reference has fantastic command over LS5/8’s and LS5/5’s.

Currently offered in six flavors, Moonriver’s Model 404 Reference modular integrated power amplifier with class AB power modules (US$4,995 base price to US$6,219 with DAC and phonostage modules included) checks even more boxes than its standard model, touting an experience to satisfy both the current and the next generation needs in music loving households.

Rich and musical in the mid-range with clear, articulate and well-defined bass, this is hardly transistors pretending to mimic tubes as it exhibits great drive, and a well-defined rhythm and pace.  As big as it is on deconstructing the percussive complexity and articulating the horn section of Al Green’s early ‘70’s recordings, it is just as committed in exposing the compression of R.E.M.’s “Collapse Into Now” while keeping it on the right side of listenable.  It energizes much like a breath of clean, fresh air or a brisk walk on a cool evening, and a hint of sun that ushers the first signs of Spring’s promise.  It puts the joy back into music.

Just like the Standard Model 404, the 404 Reference amplifier will extract hidden elements, and render textures from within any audio format; but with the capability to drive any speaker on the market – despite its moderate power. Only the source, speakers and room will set the performance limit. Its culture will suit all music, as the Model 404 is by design, set to define the faintest nuances of which tonal integrity is composed.

The texture of each individual instrument is exposed exponentially in comparison with the Standard version. A fully discrete preamp section serves to provide acute dynamic awareness, while a high output stage that is custom-optimised for bandwidth and distortion, gives neutral character and transient fidelity. A sophisticated selection of components fuses the design against tonal traits, therefore preserving naturalness throughout the shortest feasible signal path.

There are no “for show” aesthetics here, no display with complicated serial menus and hidden functions, nor a single multi-function knob for “minimalistic” purposes. The heart of Model 404 Reference is pure and minimal but the interface is user oriented and easy to operate by anyone in seconds with no need to resort to the user manual. Four knobs and three switches give direct access to any function.

Moonriver 404 Reference amplifier is modular by nature; it can accommodate an MM or MM/MC phono stage and a USB asynchronous DAC.  Fitting these modules is simple and can take place at any time, on or after purchase.  The USB DAC may also be upgraded with a newer version to meet future needs.

With the modular architecture, Moonriver is able to offer this integrated amplifier in six flavors:

You may find this feature to be vanishingly scarce in audiophile products as a result of today’s “minimalist” design mentality and the various myths accompanying it. However, balance control addresses a common problem; speakers that are positioned in asymmetry, in a non-balanced room environment. It thus provides the simplest tweak towards achieving a proper sound stage.

Living rooms and house furniture are meant to serve everyday life and may not be provisioned with an ideal listening spot, evenly distanced from each speaker to form an equilateral triangle. It is also not uncommon for one speaker to have to be placed nearer room boundaries than the other, having various frequencies boosted in a more or less predictable pattern. More often than not, balance control would come in handy in that it drastically helps overcoming volume level unevenness and in some cases even reclaiming stereo effect and the resulting focused sound stage.

As expected, the way balance control is implemented on the Moonriver 404 Reference amplifier, in parallel, will not degrade or affect the signal in any way determinable.

Model 404 Reference, like the standard model, incorporates no less than 5 separate power supplies, each featuring overload protection. The power amplifier specifically runs on a dual mono configuration, beginning from separate windings on the toroidal transformer.

WBT nextgenTM speaker terminals ensure the massive flow of current from the amplifier’s output stage, is able to drive even “difficult to drive” speakers.

Signal switches are implemented via relays, while volume attenuation is trusted on the legendary blue ALPS pot.

A soft start circuit based on a 30A relay ensures that even the on/off switch is thought out to work with virtually no burden or wear for decades.

Components are carefully selected for both suitability and reliability. We make no use of surface-mount in analog circuits, despite the fact that through-hole production costs more, and requires advanced space management & layout strategies.

Each element utilised has to be of proven stability and sustained higher performance – proficient implementation provided, before making it into our analog paths.

As for the sound, we are not to say whether Model 404 Reference is virtually transparent or inherently forgiving. Voicing it to appreciate the playlist and respect the user at all times has been the sum of all of our effort; a sincere effort to achieve effortlessness.

The Importance of Tape Monitor Loop

Most of today’s manufacturers probably reject the idea of their product featuring a tape loop. At Moonriver Audio, it has been concluded that the tape monitor loop is essential. Not only does it add the option of monitoring the difference between recorded and source material in real-time, it also, and most importantly, makes possible to insert to the chain – at will – a digital or analogue room correction processor, a buffer, a noise reduction system or any other line device available to improve the sound of a connected source.

The pristine era of analogue recording being long gone, features like the stereo/mono switch have been gradually chased out into obsolescence. Who wants to go back to one when they have two channels? “Less is more” and “more is better”. Well…

With the resurgence and interest in vinyl, whether the current rage; fashion or a real movement, countless monaural pressings emerge out there, often along with their digital… image.

Too many of them, among others waiting to be rediscovered, have currently become collector’s items, 78 rpm direct-cut gems being no exception. This is not unreasonable, as what happened between say the 30s and the 80s in terms of both musical interpretation and recording technique is by many considered to be “most of the music” – this sentence doing perhaps no justice to stunning actual developments in creation and reproduction.

The stereo/mono switch gives you the chance to enjoy recording art milestones with respect to how they were initially intended to please; in genuine mono, 2-channel, doing away with artificial phase discrepancies induced by a mandatory stereo mode.

Model 404 comes with two options in the phono stage department; one is MM only.  Both follow the exact quality principles that Model 404 is built on. Quality components and massive power supplies are also employed here, to efficiently accommodate very low noise, high performance op-amps.

Model 404 Reference comes with two options in the phono stage department; the other one is MM/MC selectable. Both follow the exact quality principles that Model 404 Reference is built on. Quality components and massive power supplies are also employed here, to efficiently accommodate very low noise, high performance op-amps.

What was desired for our USB DAC module was not to make an addition rather than an omission; instead we had to be confident of substantially raising the true value and functionality of Model 404 Reference.

Some key features; state-of-the-art XMOS USB asynchronous interface; AKM 4490 DAC chip; separate high-precision clocks for the 44,1K and the 48K sample rate group respectively; supports PCM streams up to 384kHz. USB, D/A and analog out section each one fed by its own dedicated power supply.

We work hard to get the best possible sound performance and we believe that this USB DAC is a enormous added value to the Model 404 Reference amplifier. 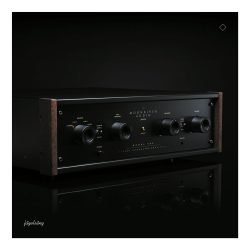 “I reckon Moonriver Audio’s 404 Reference must be one of the best integrated amplifiers currently available. It delivers an outstandingly clear, dynamic, and full-bodied sound, with great timing, plus levels of clarity and refinement that few rival regardless of cost approach. I absolutely loved it. Its modest output power might be a deal-breaker for some but shouldn’t be. All I can say is, listen carefully before making your mind up. A veritable wolf in sheep’s clothing, it offers a monstrous musical performance.”

“Every bird sings as it chooses and the Moonriver Audio 404 has a lot of songs to sing. And of course we mean that literally. It is a beautiful amplifier, not only to look at, but especially to listen to. The unique design steals the show in the first place, but it is the reproduction that continues to vibrate. Again, you may take this literally. It is not easy to explain what this amplifier does exactly, you just have to experience it. Are you tired of those thirteen in a dozen amplifiers, then let the Moonriver Audio 404 come along. Like us, you will find it hard to say goodbye. Alpha Approved!”.

“Moonriver 404 impressed us completely with its sound personality. We were amazed by its clarity, and its ability to highlight a considerable amount of micro-information and small details. Your records will seem much more supplied, detailed, and rich than usual. Acoustic instruments take on an almost physical posture, as the 404 seems capable of eradicating the coloration to deliver us only their essential marrow”.

“Absolutely fantastic with full control in the base and with an almost overwhelming musicality. It plays music in an open and transparent way, allowing for full insight into a well-defined three-dimensional soundscape. The Moonriver amplifier is incredibly nimble and precise, and has a transient response that makes your favorite music a festive moment. Everything merges into a rich and vibrant soundscape with massive amounts of information and timbre nuances”.

“I simply loved the external design of this amplifier, i.e. its front panel, I wouldn’t change a thing about it. It is balanced, calm but unambiguous. The choice of LED color only highlights these advantages. The sound of this device is, in my opinion, equally well thought out. The amplifier sounds in a very natural way, saturated and incredibly vivid way. It does not accentuate any of the sub-ranges, it does not color anything, and we still have an impression that it offers a saturated and “tight” sound. ”

“The Moonriver is a beautiful old-school integrated amplifier with astonishing sonic potential: it sounds fresh, has a clear edge and is clearly one of the most dynamic representatives of its class.”

“As you understand, we are completely sold on Moonriver and this time have no remarks whatsoever. We are instead surprised that such an enchanting amplifier doesn’t cost more and is actually built in Sweden.”