The “Mid Range Magic” music seminar series kicked off last weekend at Gig Harbor Audio in the State of Washington with our follow on event in Houston this Thursday on the 14th.

This presentation was the fruit of years of our unyielding efforts to put together a more affordable sound system for like-minded music lovers who appreciate the emotional connection with music.  There is a moment when the vocalist’s tenor pulls on our heartstring, or when the reverb of musical notes from an instrument sends vibration through our body, mind and soul.  We dubbed that magical moment, the Midrange Magic.

The art of assemblage is the gift of curators, bringing out the best of all for presentation to many.  It takes patience and it doesn’t happen without the culmination of inventors and manufacturers that are willing to work towards that same aim.  Working with the dealer network with proprietors that share the same vision and excitement to bring their latest finds to fellow music lovers was such a pleasure and we want to thank everyone for their support to make the kick off of this music seminar series possible.

A big thank you to Jason Serinus from Stereophile for making the trip to cover the show.  It was a delight spending time with Jason and as we all know, shows have challenges, we encountered one and when I went to remedy it, Jason’s discerning ear immediately recognized it.  Go here.. to read more.

Another logistics had to do with the amplification.  We were supposed to drive these speakers with the Moonriver 404 Reference Integrated Amp, the curated amplification in our Midrange Magic ensemble.  Due to a last minute logistics issue that was too late to remedy, we had to give that a skip but will present the full system in our next event in Houston on October 14th instead.

Gig Harbor Audio is like a 2nd home to many

Our host with the most-est was none other than Gig Harbor Audio’s proprietor, Erik Owen, who showed us what he means when he called his store his second home.  As each guest flowed in, Erik greeted each one by their first name, like old time friends coming to hangout except they were all music enthusiasts that were excited to hear new music and new gear.

Some attendees were sitting and some decided to stand, but all were having a jovial time, passing comments between sips of beer and after each song was over.

Many attendees brought records along with them that they shared with the rest of the audience.  It was such a delight to be in the middle of like-minded music lovers, sharing each other’s enthusiasm and distinct connection to a piece of music.  It is this camaraderie of friends, dealers, HiFi Show-goers that I meet throughout the year and precisely these exchanges that allow me to accumulate music throughout the year, enough to distill them down to one playlist to fill two or three Demo CD’s with the creme-de-la-creme.

My adventure and prep started the day before at the harbor

Upon arrival the afternoon of the day before the seminar, we jumped into Erik Owen’s car and drove to his boat moored at the mouth of Gig Harbor.  The sun was shining against a beautiful blue sky, interspersed with puffy white clouds.  It was a magnificent afternoon and Erik pottered slowly around the harbor, pointing at the houses overlooking the harbor, telling back stories about how he met each homeowner and commenting on the loudspeakers installed in each house.

We spent the rest of the evening getting the system right.

Erik for good reasons only wanted his audience to enjoy a great sounding system and wasn’t up for turning the experience into an analytical exploration.  As such, we deferred that tonearm comparison until the next event.

Music wise, our recent acquisition was the 36 x 12” singles from the 80s, with a mixture of American and English artists.  While not very practical for listening to music at home, these are sonically wonderful for demonstration purposes.  The original 1948 Columbia specification for a 12 inch long playing record was 20 minutes.  That gave us a lot more bandwidth with the same real estate to play five minutes of music.

The music was alive with a wonderful jump factor. The immediacy was palpable. The tapping feet and smiling faces all around the room were testaments to this fact.  I will concede that most of the remixes were rubbish, not to mention that most of the extended mixes were also flat out boring. Nonetheless, the heightened sonic quality of the album version of the song that we played made the experience an absolute delight.

This was the first public music seminar (not counting the S.H.O.W. in Long Beach early summer) since the pandemic and besides the Moonriver 404 Reference’s logistics issue for this event, we had another “miss”.

We forgot to pack the DIN to RCA phono cable with the Bergmann Modi.  Jake Snider, a former lead vocalist and guitarist in the band, Minus the Bear, came to the rescue by lending us an old phono cable from a vintage AR turntable.  It tied us over until the “Rescue Package” Pandora sent via FedEx Priority Overnight arrived precisely at 12:45 pm, an hour and 45 minutes after the promised time, and 45 minutes into the music seminar.

Our “Rescue Package” contained none other than our coveted Shunyata Research’s “Alpha” phono cable.

About ten minutes after we swapped out the cable, Jason Serinus from Stereophile sat down again to listen.  It didn’t take him one minute to ask what had been changed in the system.

Jason immediately asked to hear Dominique Fils Aime’s “ Nameless” again. The Rice Krispy treble was replaced by more natural high frequencies while the midrange was more fleshed out & involving.  As of this writing, we found out Jason Serinus’ coverage of this event was just published.  See >>> HERE >>> or photo below.

Against the background sound of beer cans being opened, everyone (including me) relaxed & sat back to enjoy a wonderful afternoon of music & camaraderie.

The music flowed effortlessly, as easy on the ears as the local craft beers were imbibed.

The soundstage was wide & well positioned.

The sonic differences between different recordings were readily apparent.

The eighties 12” singles sounded better than I expected. The Quincy Jones’ singles were all superb, not just Michael Jackson’s “Thriller” but also Donna Summer’s “Love Is In Control” and James Ingram “ Party Animal”.

All in all, a huge shout out to Erik Owens, proprietor of Gig Harbor Audio for being such a generous host & for inviting us all to share our love of music. 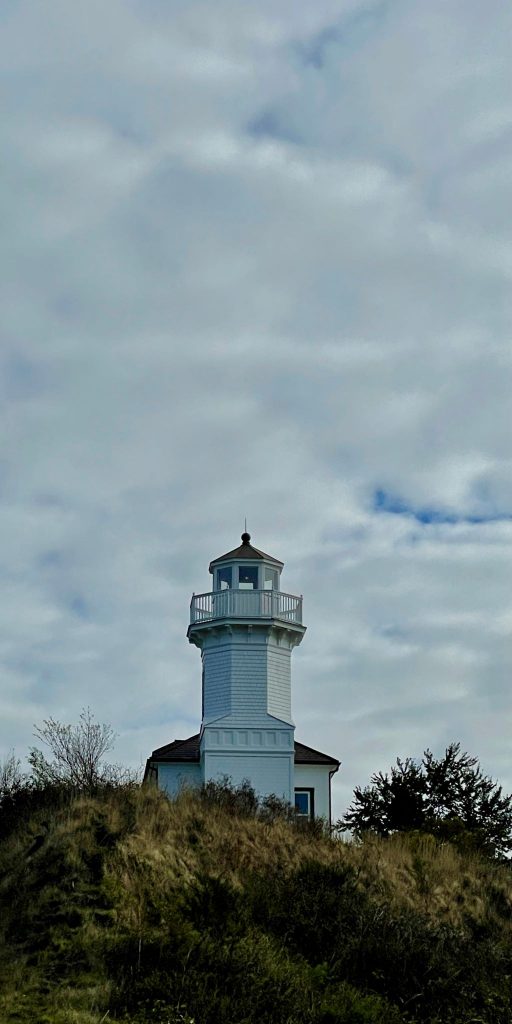 Sunday, the day after the event, I drove to visit Jason Victor Serinus at his home for a music session.

We had a discussion about Renee Flemming’s performance of Charpentier’s “Depuis la jour”.  Jason felt that she was flexing her vocal gymnastics in her phrasing rather than bringing out the emotions in the song for listeners to echo with.

All I can say, is that she sounded stunning & it was a really beautiful song.

Leontyne Price’s rendition might have been musically more engaging but I did not feel that it sounded as good as Renee Fleming’s modern recording.  I must admit, however, that I was transfixed by Ms Flemmings vocal gymnastics.

Stunning is the only word to describe it!