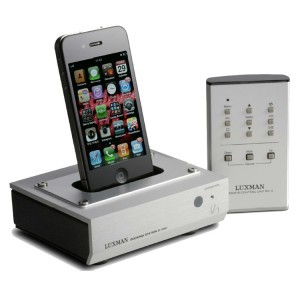 Last month the D-100r arrived and I hooked it up in my office to Quad ESL57 and it sounded terrific with my iPhone. I was so impressed I asked Pandora for her opinion, I played some uncompressed music files on my iPhone for her – it sounded glorious.

With the better interconnect the iPod dock was now quite close to the Esoteric; most enjoyable to listen to, the Esoteric still sounded better than the Luxman but by a considerably smaller margin.

Next day I played the iPod dock for Music Direct – they were most impressed also.  What a terrific way to share music with your friends. Our kids carry their music library with them on their iPhones, now they can show me what they are listening to…