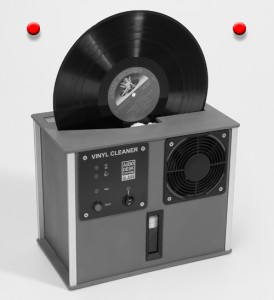 Last November I was in Minneapolis helping Paul Blizel of Analog Audio of MN host a Music Seminar. While we were setting up the Vivid B1 speakers, I took the opportunity to clean all of my demo records.  What struck me as a fantastic feature was the ability to press a button to engage the cleaning cycle & walk away.  Now while the record will be cleaned & dried in six minutes, it uses fans to dry the record rather than vacuum dry, it does not induce any static on to the vinyl. So it does not matter when you remove the LP, it will not accumulate dust.

During the New York Show I spent a very pleasant evening with Michael Fremer, over  dinner  he raved about the Ultra Sonic Record Cleaner & mentioned that he had never heard such quiet records, including records that he had cleaned with multi stage process’ on his Loricraft record cleaner.  He ended up buying the review sample. Well, during the NY Audio Show, Cable Systems were kind enough to clean all of my demo records & shortly afterwards I bought my own Ultra Sonic Record Cleaner and used it to clean 200 records over a period of three weeks before the Newport Beach Show.

There was a reliability issue with the original cleaners that were imported, but since November, 2011, Ultra Systems are confident that those reliability issues have been addressed and the cleaners are now hassle free. One thing I should point out though is that it is critical that you only pour EXACTLY one gallon of distilled water into the cleaner. There is no indicator to show if enough liquid has been poured into the water tank & you can easily overfill. Fill too much & liquid will pour out of the fans….I am guilty of this.  But rest assured fill the right amount of water & you won’t have any problems, just clean records with the minimum hassle. Its not cheap at $3900 but for music lovers with large records collections, its a huge time saver. Call your local dealer about the Audio Desk Ultra Sonic Cleaner or call The Cable Company at 800-724-3305 and tell them that Philip sent you…

P.S.   On A Higher Note has no vested interest in the Ultra Sonic record Cleaner – just a product that we think you should be aware of – its terrific & easily worth our highest recommendation.