Whilst walking the floor of the M.O.C in Munich during the High End Show with Bill Parish from GTT Audio, NJ, we came across a poster of a large out of focus fish and a new electronics company called Mola Mola.  Neither of us could figure out the significance of the large fish. So Bill picked up a pamphlet and quickly came across their designer – Bruno Putzeys – inventor of Universal Class D, who designed the amplifier modules for Hypex; the most successful high quality OEM supplier of amplifier modules & power supplies.  His partner is Jan-Peter Amerongen, founder of Hypex. These guys have shipped in excess of 250,000 amplifier modules to date, mainly into the pro arena, but they do supply Meridian, Bowers & Wilkins, Genesis, even Mark Conti’s Veloce amps have Hypex amp modules etc.  Mola Mola is their first venture into high end audio, here is their philosophy:

“If it’s not in the input signal, it’s not music”

Mola Mola embodies the idea that once you’ve removed everything that isn’t the music, what you’ll be left with is the music.

This is radical. Today’s high-end audio has become all about mixing circuit topologies and parts to make a sonic blend that the designer thinks “sounds about right”. You’d almost forget that getting closer to the source really means keeping the electronics from changing the signal.

Turning this simple insight into hardware is probably the toughest way to do audio. All simple circuits change the signal, so one has to get to grips with more complicated ones that don’t. I analyze every sub-circuit mathematically and look for ways to eliminate every error term. When the practical circuit measures as predicted, I listen to search for unexpected sources of colouration. These are then included into the math and the whole process repeated.

After every stage has proven to deliver immaculate performance, the same is done with the whole product and so problem spots get methodically rooted out before they hide themselves and become “audible but not measurable.”

The result is something never before heard of in high end audio: amplifiers and converters whose output signal cannot be distinguished, by ear, from the input signal. So what does that sound like? In a few words: natural, nimble, rich and musically enthralling.

They did not have an active demonstration, so they kindly offered to lend us their prototypes after the show.  Joe Kubala (of Kubala-Sosna fame) borrowed a room after the show was over & returned to us glowing with excitement, it did indeed sound as if the new amplifiers delivered on their promise. Unfortunately I had to fly on to Berlin, so had to miss the audition until the prototypes arrived in California in November. 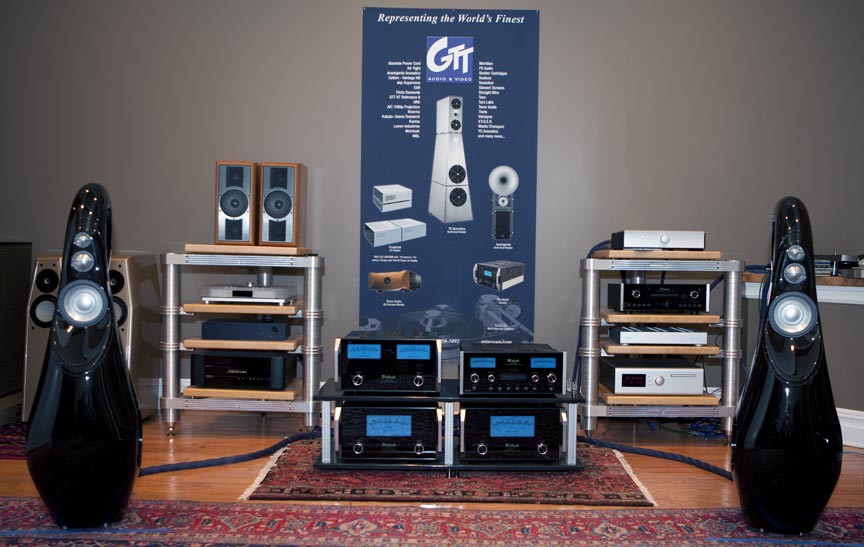 Fast forward to December 2012; as we plan on using the Vivd G3 Giyas with the Mola Mola amps at CES, we shipped these to GTT for the critical listening session.   I spent the past few days in Long Valley, NJ, at GTT Audio, with Bill Parish (GTT) Joe Kubala (Kubala-Sosna), and Bruno Putzeys (Mola Mola) putting some finishing touches to the Mola Mola prototypes. Bruno Putzeys flew in from the Netherlands and made six revisions to the amplifiers while we listened to Stevie Ray Vaughan’s cover version of “Little Wing”  and Gianluigi Trovesi’s “Animali in Marcia.” Capacitors were changed out in the power supply as well as in the input stage. Only once did we feel that a step backwards had been made, otherwise, resolution was enhanced, the soundstage grew, along with localization of instruments became better defined. The internal cabling was first upgraded from regular copper wire to  silver over copper wire in a teflon sleeve. Then we tried Kubala-Sosna’s four cores of 14 gauge; this was the last revision and we were stunned with how open and expansive the sound became.  Up until now, my criticism of Class D amplifiers has been that while very clear and powerful, the midrange tended to sound thin and emotionless. Not so with the Mola Mola, there is lots of texture to be heard, especially in the bass with bowed bass. From past experience I know that the Vivid Giyas are capable of delivering world class bass from the point of view of articulation & definition. The Mola Mola’s driving the G3 Giya sounded superb even in a room that normally I would have thought too large for these speakers.
By way of comparison, the YG Anat Signature were also pressed into service in the largest listening room at GTT, along with the Solution 700 monoblocks and 720 preamplifier.  That the $25,000 Mola Mola set competed so competitively against the Swiss Solution set @ $190,000 speaks volumes for the challenge the Dutch newcomers will present to the rest of the high end audio industry.
We will have these on active display over at Mirage penthouse during CES driving Vivid G3 Giyas. They will also be on passive display at the Venetian in 30-216