It’s great to have friends! I spent the morning calling friends, catching up and asking what terrific new music we should showcase during AXPONA this weekend.

For those of you who are attending AXPONA in Chicago this weekend, I will be in the Wells Room on the lower level (Kyomi Audio) playing both vinyl and digital music. You can also find me in Rosemont 3 (Music Direct’s room) on Friday and Saturday from 3 to 4 pm spinning vinyl.

At John Marks suggestion, I downloaded this exquisite album of cello and guitar from Pro Studio Masters. When Fiona (daughter) was a baby and had trouble sleeping, I used to play a different version of Schubert’s “Sonata for Arpeggione and Piano in A minor, D.821” specifically the first movement – 1. Allegro moderato. I plonked Fiona on my shoulder, held her close and slipped in the CD (in the dark) and hit play. Within a few seconds, she would settle down and I walked around the office for the next twelve minutes before putting her back to bed. Fiona’s favorite was Mischa Maisky (cello) and Daria Hovora (piano)—the album called: Schubert: “Songs without Words” on DG.

This is an interesting twist on the same music—the piano has been replaced by a guitar and it’s superbly well recorded. Saint-Saens’ “The Swan” cello / guitar duet works really well. The De Falla 7 Popular Songs are also interesting and well executed. Album concludes with Paganini’s “Variations on One String, on Moses” by Rossini. A very interesting blend of rare and well known—a little for everyone and definitely worth checking out. Also available on CD.

Grammy award winning recording engineer Tom Caulfield dropped by last Thursday night and played his MC recording of Iván Fischer & BFO – Mahler 3 in Quad DSD. JRiver 19 on that computer was too old to play Quad DSD, so we listened to just the front L & R channels.

Up until now I had not heard any native Quad DSD recordings that I thought musically worthwhile. What I heard was second rate musicians playing third rate music. The kind of audiophile dreck you listen to once, comment that it sounded amazing but you would be perfectly content never to hear it again.

Fischer’s Mahler 3, first movement was in a different league; a first rate performance by a superb conductor in his prime. Tom’s recording technique is quite purest. He uses a tree with five microphones. The mic feed is connected directly to the Merging + Horus digital audio workstation. This recording does not spotlight the instruments but rather, lays them out in a perfectly natural soundstage. You can hear the wind instruments are at least 20 if not 30 feet behind the strings. I heard at one stage there were percussion off to the left hand side, but deep into the soundstage off in the wings.

With quad DSD, I have never heard such a quiet noise floor as well as a beautiful rich timber. The soundstage was truly remarkable—we’re not talking about left and right but rather, an immense depth. We were truly transported to the Bela Bartok National Concert Hall.

I can’t wait to play this in true stereo at Axpona (with the center channel information folded into the L & R channels). I am sure this native Quad DSD recording will be a terrific seller for Channel Classics – Bravo!

In 1881 Sibelius (aged 15) and his siblings had formed a trio in which Linda played the piano, Christian the cello and Janne the violin. Their mother played the harmonium with the children. “We played together; Janne played the violin, Kitti the cello, mother the piano or the harmonium. Janne composed for piano and violin at a fairly early age, and I had to accompany him from the notes he had written down, which was not easy,” Linda Sibelius later recollected.*

His early works must be seen against their background: the music is astonishingly good considering that it was written by a teenager who, apart from a few piano lessons, had received no instruction and who had studied musical theory on his own with the help of just a couple of books.*

The “Korpo Trio” is his fourth Piano Trio and we feel it shows all of the young creativity of similar early Beethoven and Mozart Piano Trios. There is a wonderful joyfulness, creativity is flowing and delightful melodies are abundant. This recording by The Sibelius Trio is the first since the music has not been published yet. The musicians played off of copies of the original manuscript, written in Sibelius’ hand. These Finnish musicians are very accomplished and are to be commended for bringing these obscure treasures back in to the light of day.

Recorded at the Samuelli Hall (Orange County Performing Arts Center) last week of March 2016 in Quad DSD in multi-channel on a Merging Technologies “Horus” digital audio workstation by Tom Caulfield. Bob Attiyeh from Yarlung Records was kind enough to permit us to showcase this preview during AXPONA.

“A recording of Beethoven is always a great occasion and event. The marrying of the music’s historic interpretation with the brilliance off the Pittsburgh Symphony Orchestra’s playing and the fantastic technique of Soundmirror have made this recording, comprised of three live concerts from December 2014, possible. It has been a joy to look deeply into that which Beethoven has composed, while also discovering the sense and content of the music and the thus the reason why it has been written. For me, this is always the most beautiful part of the creative process.”

We will play comparisons of this superb recording in DSD64 vs DSD128 vs DSD256. The interesting thing about the ESS DAC chips that NADAC uses (along with many other manufacturers) is that they sound dramatically better at the higher DSD sampling rates, because there is little or no processing going on inside the chip. You will hear a noticeable improvement in sound quality as the sampling rate increases.

By the way, the team at Soundmirror, (whose outstanding orchestral, opera and chamber recordings have received more than 70 Grammy nominations and awards and has recorded for every major classical record label) is now recording for Reference Recordings under a new series called FRESH!. This is also available on SACD. 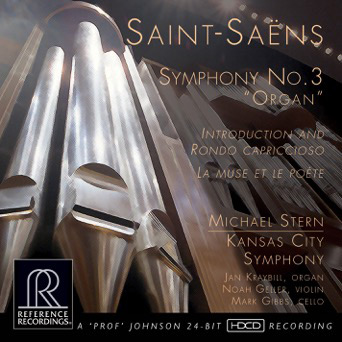 Composed at his artistic peak, Camille Saint-Saens said of his Symphony No. 3 “With it I have given all I could give, what I did, I could not achieve again.”

Keith Johnson recorded the Kansas City Symphony at Kansas City’s Kauffman Center for the Performing Arts, which has a wonderful 5,548-pipe Casavant Frères organ. This recording shows that you don’t need globally fêted artists to craft a performance of finesse, luminosity and drama.

This recording from an audiophile’s perspective has a distinct edge in that it’s a state of the art recording and musically it’s a compelling performance. Also available on CD.

Vanessa Feranndez – “When The Levee Breaks”

Preliminary Notes: Listening to these records, I am most impressed by the arrangements. These are not note for note copies of the Zeppelin songs but use the melody as a foundation and build upon them. Charlie Bisharat’s violin introduction to Kashmir is superb and his playing throughout the album is exemplary. It does not make sense to try and outperform Jimmy Page, so to offer up the violin instead of Jimmy Page’s blistering original guitar work is inspired. So the new arrangements and vocal delivery are new and exciting, while still returning to well-loved rock classics.

Ms. Fernandez certainly has an interesting take on the Zeppelin Canon; it’s compelling stuff. Looking forward to playing these over the weekend. I’ll probably have to wait a couple of years before getting a copy of When The Levee Breaks on tape. If Use Me on tape is anything to go by, it will be well worth the wait.

Hope to see you at AXPONA this weekend.