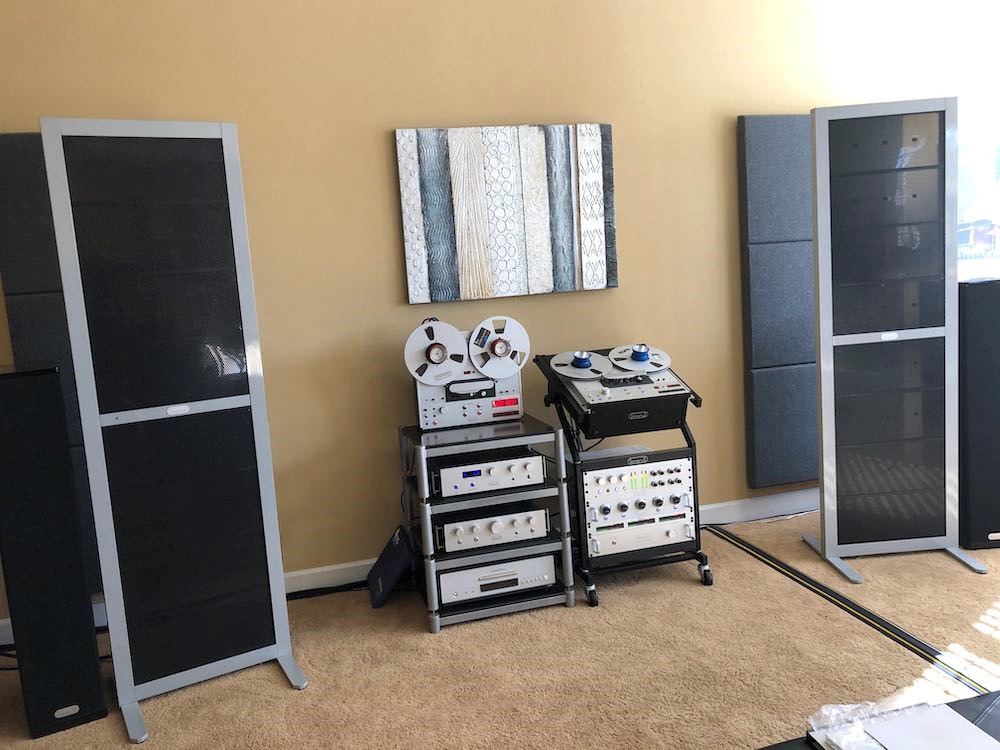 The performance of Master ¼” 2 track tape playback at 15 IPS is in a word, “wonderful” by my standard!  Sadly enough, the repertoire is a little lacking so I was toying with the idea of curating playlists from my diverse vinyl collection, recording them to tape to expand the music that I could offer at consumer audio shows & during dealer events across the continent in this specific playback format.

As luck would have it, I had to drop my SonoruS / reVox PR99 off at SonoruS for service. While I was there chatting with Arian, I mentioned my idea and asked if I could record some records to tape with him.  Arian generously replied in the affirmative and I promptly returned a few weeks later, clutching bags full of records and reels of blank tape.

Prepping the records and the turntable

I had cleaned all the records on an ultra sonic record cleaner beforehand but in the process, we found that some so called “mint” records had a whole bunch of noise junk on the vinyl.  We trust non other to do the job than our old fashioned VPI 17 record cleaner.  Slow & noisily though, it did work a treat.  Realistically, an occasional click & pop is expected during vinyl playback but the emphasis has to be on the word “occasional”.

Arian has a Goldmund Reference turntable from the 80’s, considering this was an $80k turntable over thirty years ago, you would expect it to sound pretty impressive even today.  It certainly did not disappoint.  Arian’s cartridge setup deserves its own write-up.  Let’s leave it at ‘fastidious’ for now.

The rest of the gear

The rest of the gear in the chain, other than the woofer towers are designed by Arian. This includes the phono stage, preamp, OTL amps, electro static speakers, even the tape recorder and the playback machine!

The jewel in the crown in my opinion is the the Sonorus Holographic Imaging Processor, a playback process that is able to extract a level of detail from existing recordings not available from regular systems. If the original recording contains true ambient or surround information, the result of the SonoruS Holographic Imaging Process can immerse the listener in a sound field that extends to almost 360 degrees, even though it is only reproduced from two channels.

In order to preserve this very high level of detail, the result is recorded onto analog tape at 15ips. An important additional benefit of analog tape is that the playback of the medium is the least intrusive and least compromising of any of the available media, allowing the degradation by the playback equipment of the recording to be less than vinyl or digital media. The final result is a greater level of detail, lower coloration and a significantly improved soundstage.

Case in point, we recorded the 12” single of Yello’s ‘Pinball Cha Cha’.  The band played in front, just as you would hear on a well set up system, with a wonderfully wide and deep soundstage. Off to the sides of the listener, both to the left & right were the percussion.  The sound effects were clearly behind the listener’s head. All from two speakers !

Between cleaning the records, listening to the pre-chosen track and eliminating some albums that have funky artifacts, we settled down to record 33 – 34 minutes of music per reel. By the time we had listened to both reels that we recorded, we had spent seven hours.  I played the first pair of tapes at T.H.E. Show in Long Beach in June and many of the reviewers complimented as never having heard such a wide & deep soundstage before. The Gryphon electronics can drive any loudspeakers with an iron fist, including Gryphon’s own speakers.  Stay tuned for music events playing these amazing tapes at a Gryphon dealer near you.