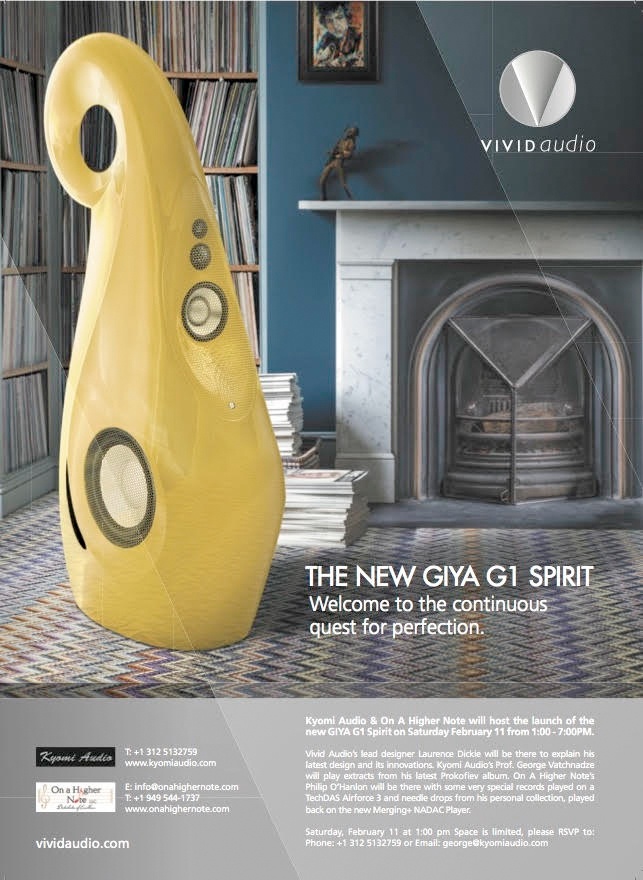 We are very excited about sharing details of the launch of Vivid Audio’s new flagship speaker system—the Giya G1 Spirit. Ten years in the making; the original Giya G1 was launched at CES 2007. Stereophile’s Wes Phillips posed the question: “Is this the Best Loudspeaker I have ever heard? Yes.” Japan’s Stereo Sound not only gave the Giya G1 ‘Best Loudspeaker of The Year’ award in 2008 but also ‘Golden Sound’ for the overall best product of the year, beating out the Wilson XLF and the Focal JM Lab Grand Utopia Be (both at more than twice the price).

The Spirit evolved from the already stellar performance of the G1 but adds considerably more LF as well as more color / tonal density to the mid-range. It builds on the crossover originally designed for the B1 Decade, delivering crystal clear, extended highs and an unparalleled performance at any price. The woofers have greater excursion with double the power handling. The external crossover must be a good idea, as we know from the Artesania racks how sensitive our audio gear is to vibration. Inside the cabinet those pistonic woofers generate a HUGE amount of pressure. The 2017 spec G1 is no slouch with the integral screen tweeters and the mids and HF design crossover from the B1 Decade, but the Spirit takes the Giya performance to a different plane. It is definitely a contender for the Best Loudspeaker Design Ever! It ticks all the boxes: lowest distortion, highest resolution, linear performance, true full frequency response (no subs needed) …

Instead of launching Vivid Audio’s new Spirit at CES 2017, we opted to delay the launch by a month and throw a great party in Chicago instead. We chose Prof. George Vatchnadze as our host, because of both his musical and audiophile pedigree—the Georgian is a professional pianist and listener. Who better to explain the significance of this 21st Century design than Georgia’s favorite musical artisan. George is also a touring concert pianist and is currently recording the entire Prokofiev piano sonata cycle with Exton, Japan for release on SACD and download. By day, he heads up the piano department at DePaul University. See George in action below.

Guest speakers include John Atkinson (editor of Stereophile), Doug Schneider (editor of SoundStage), Laurence Dickie (Vivid Audio’s chief designer). Yours truly will be your DJ and Chief Fun Officer. For those interested, there will be a Press Q & A with Laurence Dickie at mid-day.

Learn more about the new Giya G1 Spirit (retail $93k) which should be a dramatic improvement over our own Giya G1. Music will be played on the new TechDAS Airforce 1 Premier as well as on the new Merging+NADAC player. We do hope that you can attend.

On a Higher Note
Kyomi Audio